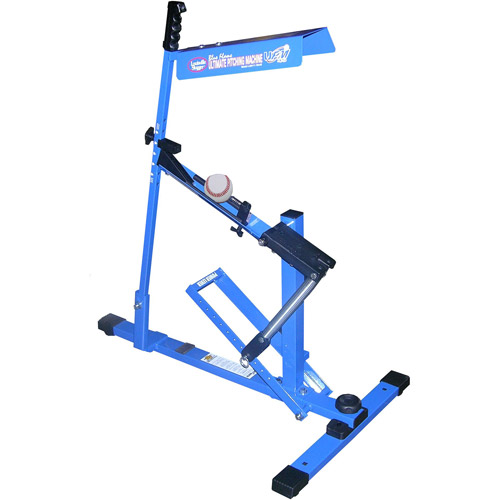 I recently bought this Louisville Slugger product (the “Blue Flame”) on Amazon and I have to say it’s pretty cool!

I chose it because it does not require power (no cords, batteries, etc), it is spring operated.

I will say that when I set this thing up, the main plastic part shattered after only 5 uses… but, I contacted the vendor who sold it and they were awesome and immediately shipped me a new part and the machine has been working great since.

I’ve used this machine at a few parks around the city and people are always coming up asking “What the heck it that thing?” and find it cool and interesting. So this thing is fun to use and a good way to meet new people!

Oh, yeah, and my kids are getting to be better at hitting.

I’ve been installing CentOS 5.8 VM’s for a while now using KVM/Virsh and setting the serial port so I could do “virsh console” and do the CentOS setup in text mode. Since all my servers are essentially headless I turn off graphics and do the text install.

This had been working great until I started moving up to the version 6 release, and I tried everything up to 6.4 with the same results — it would do a condensed version of the install (i.e., it would stop prompting me to customize the drive partitioning, and would not let me customize the networking among other things) and then it would prompt for “reboot”. Once it was booting, it would hang on “Starting crond”. I went into “I”nteractive mode and found the next item in the boot process was “local” which could point to graphics problems. I tried the ISOs for 6.1, 6.2, 6.3, 6.4 both the full installations and also the network installation versions, all with the same results.

So I switched to doing a graphics install with VNC. This did the trick, but was not as clean since I had to use the VNC interface to then go in and set up networking and get it ready for access. In the old text method you could easily edit and paste from window to window for the configuration, the VNC viewer prevents easy copy/paste from other windows and limits you to 24 rows as it displays the console. But at least I got 6.4 running.

Here is the virt-install command I used:

I had to specify the listen IP otherwise it binds to localhost, and I needed to NAT my router to my internal 192 address.

After the install you can “virsh edit” your VM to remove the graphics section so you don’t have a VNC hole laying around.

My next step was to make sure I could still use “virsh console” to access from a command prompt, I’ll do a separate post on that.